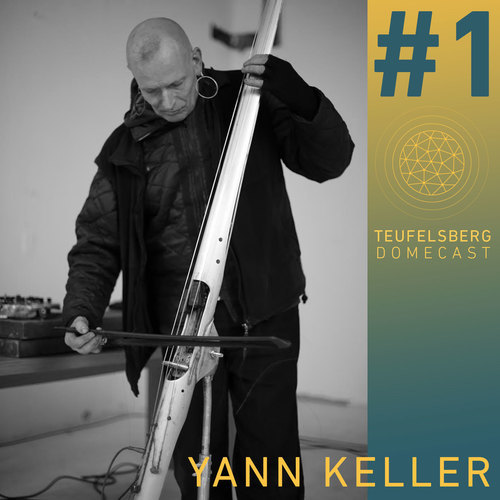 Welcome to Teufelsberg Domecast, a podcast series with ambient experimental live performances using the dome at the top of Teufelsberg as a natural parabolic reverb.

Our mission is to gather hand picked artists with a deep interest for music experimentation in their distinctive musical background. We look for artists who are dedicated to pushing the boundaries of frequencies and putting the dome to the test of sound.

A little about the artist: Yann Keller

Where are you from? How long you’ve been in Berlin ?

It all began in Berlin. I was living in Duisburg, Oberhausen, Arnhem, Amsterdam and back in Berlin.

When was the origins in creating your own instruments? How did it become what is it today ? (And the steel bass and noise/pad control you had during the recording ?)

I was discovering Wagenplätze and then after I had made my examen in doublebass in arnhem I unlearned the conservatory/university by putting pieces of metal together and primitive sound devices which later became basses. The point was to use as much aspects/structures that were already made in the material. f.e the steel-pipe as fingerboard for the string-bass with some resonances, 90cent piezo material and such. I feel in love with a movement.

Although the movement did not fall in love with me the same amount... For a period, I started to really like extreme harsh noise and fast beats like gabber, speed-core, splitter noise core, speed-noise+noise with chaotic rhythmical structures...then left the beats behind, stoped relating to marching music.

Many people like harmony but for me harmony means an equality between inside and outside. so complete apocalyptic chaos could mean relaxation and meditation. More recently, I do relate to certain structures coming from the chaos to the new classical music on the basis of spontaneous improvisation which at the same time could be a composition.

This is an artist to artist project and with our formaviva you can support the artists involve. 50% of the revenue of the release goes directly to the artist and 50% goes towards hosting and recording more Domecast sessions.