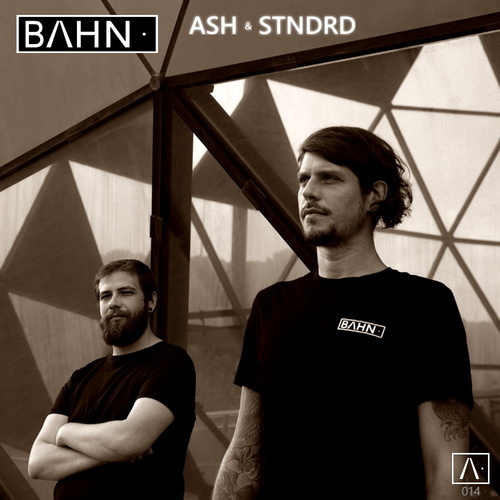 The Fourteenth of our podcast series.

Our first b2b podcast of the series comes from ASH & STNDRD, active members of BAHN· Collective and 2 of the co-founders of our label, BAHN· Records.

ASH is a space traveler exploring the galaxies around all the universe, searching for intelligent beings and establishing a first contact with them through analog machines and sound vibrations also known as Techno by some developed civilizations.

Hypnotism made by defined low end frequencies, rhythmic pulsing fat bass lines, flying space acid modulated synthesizers, minimalistic noisy cracked high frequencies elements, far away three dimensional alien drone ambiences, is a good way to explain what is ASH. For ASH, the goal of each hypnosis session is to inspire freedom, disconnection of the mind, create a feeling of well being in a collective sensorial fusion and make the dance floor express itself spontaneously.

Leandro Rossi (aka ASH) is a Brazilian artist based in Barcelona since 2012. He started his project ASH in 2017, and is known by his own music style (Acid Space Hypnotic). He’s been spinning on the most important techno parties in town like BAHN· (where he is resident since late 2018), TechnoTrippin’, Rezonanz, HEX, NODE and Insert in clubs such as Razzmatazz, Moog, The Garage of the Bass Valley or LAUT.

2019 was the year when he made his international debut at the legendary KHIDI in Tbilisi (Georgia) alongside the BAHN· crew.

Diogo Lopes aka STNDRD , started his techno Journey in 2018 with some releases as STNDRD and Simbiose.

Born and raised in Oporto (PT), he is now based in Barcelona to keep evolving his career.

In 2 years on market, he has already seen his music being released in Vinyl (including remixes of Vertical Spectrum and Voidloss) and was well supported by some of most important artists in scene as Oscar Mulero, Lewis Fautzi, Kessell, Inigo Kennedy, Abstract Division, Svarog and other greats.

Part of BAHN· Collective since 2019, right after he moved from Porto to Barcelona, STNDRD has already played in the legendaries Moog in Barcelona and Industria in Porto, but also crossed the Pyrenées to show his talent in Suicide Club in Berlin (DE) & Gazette in Cluj (Romania).

2020 is being a very productive year for both in terms of production with various releases in several labels, and more new stuff to come from Diogo and Leandro in the next months, as well as their first vinyl release on BAHN· Records at the end of the year alongside some other great artists.